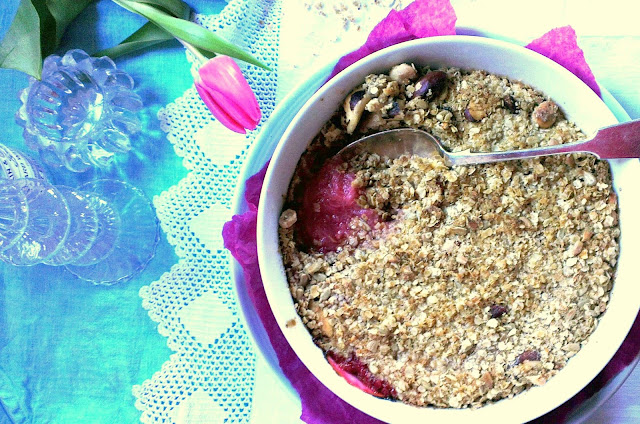 We’re lucky to have an early rhubarb season right now in the ‘rhubarb triangle’ around Wakefield, Leeds and Bradford in Yorkshire, England.

The stems are 'forced' in the dark, then as if by magic, out pop a plethora of pretty pink, tender shoots.

This recipe makes the most of a crumble topping as it should be. The oats, nuts and seeds give crunch and contrast, while the rhubarby nectar seeps into it in the oven to bind it all together.

I’ve christened it 'Rockstar' rhubarb as this recipe merits a showstopping, juicy headline.

For extra oomph try serving with crème fraiche flavoured with some syrup from a jar of stem ginger.

Ingredients
For the filling:
Fresh rhubarb - as much as you want. You can use up leftovers on its own or serve as a side to the crumble.
Sugar to taste
½ cup cold water
1 small knuckle fresh root ginger, peeled and finely chopped or grated.

Method:
1. Roughly chop and lightly stew the rhubarb with the water in a covered pan until soft. It usually takes about ten minutes on a medium – low heat. Add in the ginger and sugar to taste. Place enough of the mixture to fill one third of an ovenproof bowl that’s deep enough to add the crumble topping to. 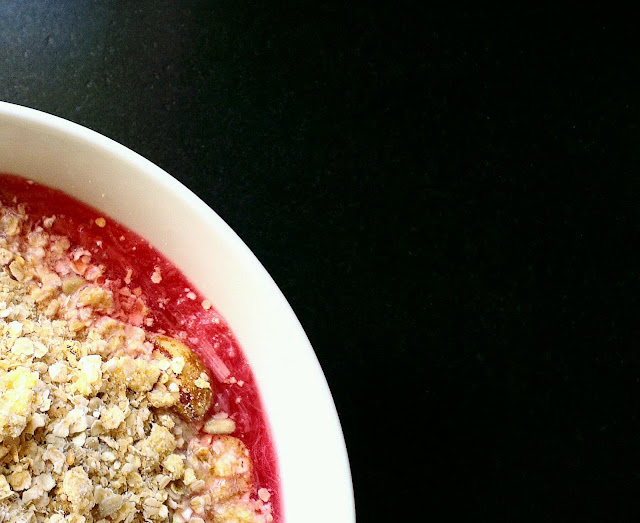 2. In a separate bowl, rub in the butter and oil with the flour, oats and sugar. If using unsalted butter add in a pinch of salt.
3. Add in the nuts and seeds and mix thoroughly. Place on top of the rhurbarb mixture, even out the topping so it’s touching the sides of the bowl.
4. Bake in a medium oven for 15-20 minutes or until the topping is a pale golden brown.
Email Post
Labels: Cakes and desserts Egg free For Children Gluten free Vegetarian dishes