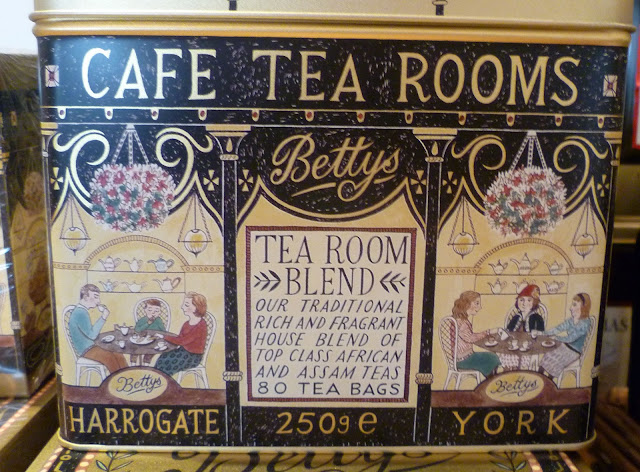 I hadn’t realised quite how well respected Betty’s is away from Yorkshire. That is until I got chatting to my cookery school counterparts last Sunday about how far they’d travelled. From South Wales, Ohio and Hertfordshire all the way to Harrogate, apparently distance is nothing when it comes to learning patisserie.

Fuelled by the recent excitement and passion of The Great British Bake Off, we had all enrolled onto Betty's ‘Patisserie Perfection’ course.

You may think that a traditional pastry lesson wouldn’t be the best of choices for someone who eats mostly gluten free nowadays. Yet I find the true joy of baking is as much about the making. After that (for me anyway) it’s about giving other people enjoyment with your food. 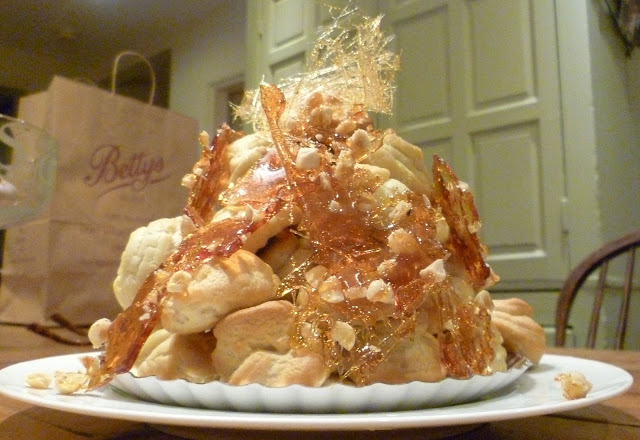 Besides, I did get to taste the French meringue, crème patissiere and chocolate ganache (all strictly in the name of learning obviously). I also made a gluten free choux when I got home, so I've included the recipe for you below. 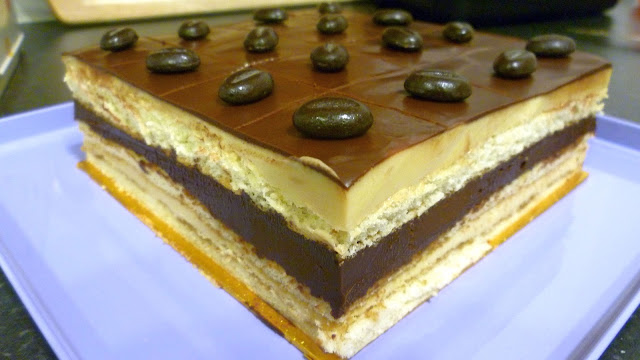 It was a foggy, winter's morning when about 20 of us turned up to the Harrogate based school to be greeted with a warm welcome from our host Chris Taylor. As well as a proper cup of tea or coffee (Betty’s and Taylors home brews, naturally), we were also given warmed croissants and a fresh fruit salad to brighten our spirits.

After a demo from two professional patisserie chefs, David Haynes and Michael Vanheste, who took us through the components of a Gateau Opera, a coffee/amaretto/chocolate concoction with enough fat content to sink a ship, we were let loose. 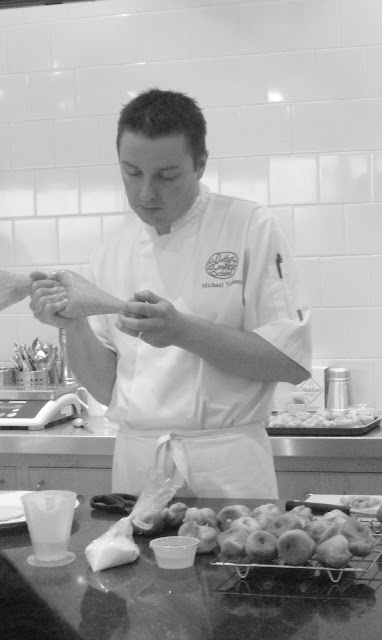 Despite my initial nerves at taking on such a complicated cake, the instructions we were given were easy to follow. To my surprise I had soon knocked up a Joconde sponge - an almond and whisked egg white based cake, named after the Mona Lisa no less. Add to that my first ever hazelnut crème patissiere and a glitzy chocolate ganache and they already had a happy customer. Into the same cake went an indulgent coffee buttercream and to finish it off, a chocolate glacage, which is a professional looking icing with a sheen.

We also did a croquembouche, something which I'd seen during my time en France. It’s a dessert usually reserved for weddings and christenings and is based on choux pastry buns filled with a crème patissiere (and a hazelnut flavoured one at that). Then you make a caramel and dip each profiterole into it before assembling it into a beautiful cone tower. Or as you can see, a mini mound as mine became. We also did spun sugar which looked fabulous glistening on top.

Timings of the course were spot on. Considering we also had to create a vanilla and raspberry vacherin - a meringue based dessert so called because it resembles the French cheese, we managed to squeeze in a huge amount of cooking and skills into one day. That said, the schedule was tight, starting at 9am and finishing at 5 30. So this 'advanced' course is no place for a shy cook, although the school does offer more relaxed courses for those at all levels.

The whole day was challenging but incredibly rewarding and totally delicious.

Patisserie Perfection? Definitely. Five stars, even for a fussy eater. 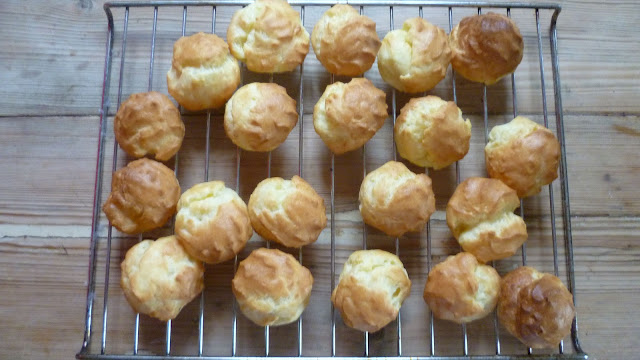 Place the water, milk, sugar and salt together in a heavy based pan over a moderate heat. Add the butter and bring to the boil.

As the liquid comes up to th eboil, remove from the heat and quickly stir in all the flour in one go and using a large spoon beat quickly until all the flour is combined and a thick paste has formed. *If using gluten free flour, you'll need to work the paste a little longer as it doesn't combine with the liquid as well as normal flour.

Return to the low heat and cook for a further 2-3 minutes until the paste forms a cohesive ball, dries out and comes away from the sides of the pan.

Remove from the heat, place into a mixing bowl and allow to cool for a few minutes.

When cool, gradually add the egg a little at a time, beat after each addition and continue until you get a dropping consistency when you hold the spoon above the bowl and a stiff batter has formed (you may not need all the egg).

To form the choux buns, place mixture in a piping bag and pipe aprox 15 buns on to each baking tray. With a wet finger, push down the peak at the top so all the buns are the same size and shape. Bake in a preheated 200degree oven for 15-18minutes or until golden.
Email Post
Labels: Gluten free